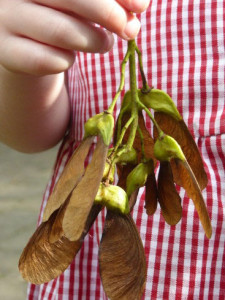 As the summer ends, many plants are preparing for the next generation and launching their offspring into the world. September is a great month to explore and investigate your school grounds and local wild space for different seed dispersal strategies.

Flowering plants are called angiosperms, which translates to a ‘seed in a vessel’. They are the largest and most diverse group of land plants with over 300,000 species, which represents approx. 80% of all known green plants living today.  As plants can’t move this has resulted in many ingenious seed containers to help plants disperse their seeds.

We’ve all seen wind dispersal in action as most of us once, and maybe still do, collect the fluffy seed heads of dandelion ‘clocks’ to blow their parachutes into the air – fairies that carry the seed and a wish aloft. Wind dispersal enables seeds to be taken away from the parent plant to reduce overcrowding and competition.

Other seeds with fluffy hairs (pappus) are rosebay willowherb and thistle which float in the air and are carried by the wind. However, most seeds don’t fall in suitable growing locations which is why plants that use wind dispersal produce so many seeds.

Others depend on the wind in different ways. The ‘salt-and-pepper shaker’ style pods of the common poppy and red campion rely on the wind to shake their long slender stalks, tipping the shakers and depositing the seeds away from the plant.

Whilst sycamore trees produce thousands of double-winged seeds (samara) also known as helicopters or keys. If tossed in air they spin around in the wind and have nicknames such as spinning jenny, whirlybird and wing-nut. Ash, common lime, hornbeam and field maple also have winged seeds which propel them through the air wherever the wind takes them.

Seeds have also developed to become hitch-hikers, with hooks or barbs to attach to passer-bys. Children love finding ‘sticky wickets’ or burr to throw and stick on unsuspecting targets.

Plants that grow near water produce seeds that can float and use the flowing water to carry their offspring away. Whilst others produce seed containers that explode and burst open which such force that the seeds are propelled from the parent plant. Listen out for the popping sound of exploding seed pods of gorse growing on the New Forest heathlands.

Animals also eat and help disperse seeds of fruits such as blackberries, hawthorn and rowan. The seeds inside, protected by a hard coating, are dispersed through their droppings – the perfect package of fertilizer to help the seedling grow! Another two part arrangement is when seeds are dropped onto the ground, such as acorns and hazelnuts, which are carried away by squirrels, jays and small mammals. Some are eaten, whilst others forgotten in their hidden cache enabling seedlings to grow away from the parent plant.

All seeds are dispersed in a variety of ways but with shared aim of producing the next generation.