Nature is full of fascinating surprises, as I found out recently when investigating the ladybird life cycle with a group of reception school children.

We were very intrigued to discover that the ladybird emerged from its pupa completely yellow with no spots! Having just read ‘Lucy Ladybird’ a story about a ladybird with no spots, we thought we must have a very special ladybird indeed.

However, to our amazement the next morning our previously yellow ladybird was now red with 7 spots.

Our research revealed that all newly emerged ladybirds are bright yellow, and it’s only as the wings harden that the colour and markings of each species develops.

One of the children suggested that ladybirds get a spot on each birthday – a great idea, but the spots do not relate to age.

This study certainly demonstrated the value of shared investigations where children can actually see stages of development first-hand whether its butterflies, stick insects or tadpoles – as there are always new wonders and secrets to be learnt.

A newly emerged yellow ladybird with a slightly sticky sheen on its wings. 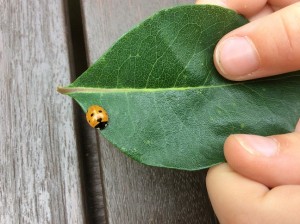