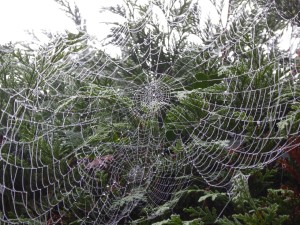 Nature has many beautiful designs and amongst these the intricate beauty of a spider web glistening with dew in the early morning sun is a visual masterpiece. Late summer and early autumn is the best time to admire and study these amazing web designs as they can be found everywhere – gardens, fields and forests.

Spiders are invertebrates with jointed limbs and belong to the class Arachnida. Although widely thought so, spiders are not insects. Spiders have eight legs, insects have six; spiders lack both antennae and wings which most insects have; spiders have two distinct body parts (cephalothorax and abdomen) and insects have three (head, thorax, abdomen).

All spiders produce silk from spinneret glands located at the tip of their abdomen. As the liquid silk leaves the spider’s body it quickly hardens to form the familiar silken thread. Most spiders have three pairs of spinnerets which produce different types of silk for different purposes, such as a safety line, sticky capture silk for trapping prey or a fine silk for wrapping up lunch!

Amazingly, the tensile strength of a spiders silk is up to five times as strong as the same weight of steel and has much greater elasticity.

All spiders are able to produce silk but not all spiders spin webs to catch insects. Webs very in complexity and structure, but a few common and distinctive web designs can be recognised. Spiders are classified by the type of web they weave.

The large conspicuous spiral webs suspended between tree branches are orb webs.  Some species of the orb spiders remain in the centre of the web, whilst others hide in a nearby retreat where they wait to feel vibrations along a trap-line that is stretched tightly from the centre of the web to the hidden spider.

A spider does not become entangled in its own web because it can spin both sticky and non-sticky silk and steps only on the non-sticky lines!

Some species of orb spiders also weave in decorations called stabilimentum. It is thought that these patterns help stop birds flying into and damaging the web. Orb weaving spiders make their webs at night and usually take them down in the morning. Constructing a web takes a lot of energy and the spider will eat the silk to recycle some of the protein used to make it.

Another type of web is the sheet web. This web is spun horizontally with special non-sticky lines above it. These lines knock insects down into the sheet where they get stuck. Some spiders spin funnel webs which are wide at the top and then get narrower. The spider waits at the bottom of the web waiting for its prey. If you gently poke a piece of grass into the entrance of this web you may see its occupier jump out!

Spider spying:  Spiders often make a new web every 24 hours. Most activity takes place at sundown during September and October when spiders are more numerous.  Observe these wonderful silk creations being made. This may inspire you to write a spider journal.

Make own spider web frame: Make a square wooden frame approx. 20cm x20 cm attached to a stick and place near a flower bed. In the morning you may see a beautiful web inside your frame which you can move to study up close.

Spider sensations: Activity for 6 children – Use a block of wood with 5 yarn strands attached. One child can be the spider and is crouched next the block blindfolded. The other 5 children are insects and each take a strand of yarn that radiates in all directions. The spider places their hand over all the strands, and an insect plucks a taut strand. The spider has to crawl along the correct strand to capture the insect.

Spider hunt: Make a spider web hunt worksheet to record the different web designs found around the school grounds. Try and identify which spider has made the web. A fine spray of mist from a water bottle will help make the web stand out from its background.

Spider web spinning: Create your own orb web by weaving wool around two crossed pieces of stick – use different colour wool to represent the sticky and non-sticky web lines.