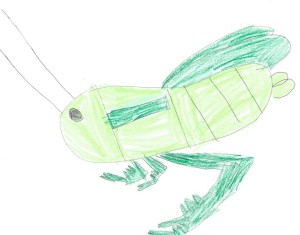 It is a popular myth that a cricket chirps by rubbing its legs together. In fact, crickets sing with their wings and listen with their legs! During the summer they are an easy insect to find in school grounds in long grass and brambles and are fascinating to study revealing some remarkable adaptations. So how and why do crickets chirp?

All crickets hatch from an egg as tiny versions of the adult called a nymph. We don’t hear them in the spring because the young, which overwinter in the ground as eggs, don’t yet have wings. Like other insects, crickets have a hard external shell called an exoskeleton. Nymphs grow by moulting through 4 or more stages (or instars) before becoming winged adults.

However, instead of using their wings to fly crickets usually walk or use their strong hind legs to leap away from danger.  Only the male uses his wings – but this is to sing! A chirping sound is made by rubbing a series of ridges on the wing vein against a hardened section of the other wing’s edge to produce the familiar rhythmic chirp you hear on a summer’s day.

Grasshoppers differ as they rub their legs against their wings – a row of pegs along the inside of the hind leg which acts as a file, rubs against their thickened forewing to create the chirping sound.

Male crickets mainly chirp to attract a female. They can produce four different calls including a loud ‘calling song’ to attract females and a softer ‘courtship song’. To find the male, the female listens using her legs – a cricket’s ears are on the knees on each front leg.  Whereas, grasshoppers have ears on their bellies – on the abdomen tucked under the wings. Like birds, each species can be identified by their unique calls.

Crickets have long antennae, usually much longer than its body, which distinguishes them from grasshoppers. Female crickets also have an ovipositor (egg-laying organ) which looks like a long, sword-shaped tail.

To convert cricket chirps to degrees Fahrenheit, count number of chirps in 14 seconds and then add 40 to get the temperature. Example: 30 chirps + 40 = 70 F